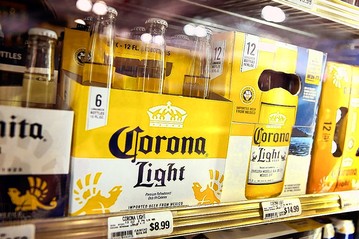 Looks like it’s not going to be such a hot holiday season for liquor companies, casinos, and prostitutes – at least according to the latest reading of the “Vice Index.”

The index – a concoction from SouthBay Research’s Andrew Zatlin measures actual spending levels – yes, on vices – and uses the numbers to show where the economy is headed. As opposed to Tuesday’s chipper report on the services sector from the ISM, the vice index’s September sounding came in at 104, its lowest level since February’s 96.

That means, Mr. Zatlin said, that not only will spending drop from levels earlier this year, but it’s going to stay that way into the first-quarter. The index, he says, is highly correlated to official readings on consumer spending, with one caveat – the vice index predicts consumer spending four months out.

“It’s signalling that consumer spending growth is about to drop and stay subdued for a few months,” he wrote in a note to clients. “Not contracting, but well below expectations.”

The index measures spending on things like prostitution, liquor sales, and gambling; it measures prices paid, the volume and frequency of sales (Mr. Zatlin doesn’t disclose exactly how he tracks these). Measuring this kind of discretionary spending, he says, provides a window into the true state of the economy. 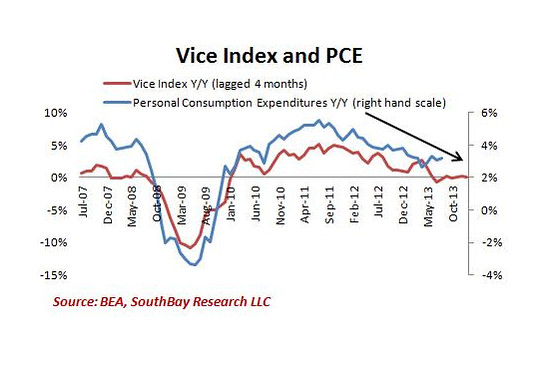 What this means specifically for holiday sales isn’t exactly clear, Mr. Zatlin said. Vice spending tends to be more spur of the moment. “I don’t think people spending on vices think that far into the future,” he told MoneyBeat. But it certainly doesn’t point to a robust holiday season.

On the other hand, Tuesday morning’s report from the ISM on the services sector – coming in at a better-than-expected 55.4 – helped turn the market around on Tuesday, and that mood has followed equities on Wednesday. Here’s the thing, though: The ISM survey is what’s called a diffusion index. In other words, it doesn’t measure actual levels the ways, say, the Dow Jones Industrial Average does, or the vice index for that matter. ISM measures sentiment and the rate of change in sentiment.

The vice index seems to jibe with recent government data. The September retail sales report from the Census Bureau showed spending had slipped from August, and was up about 3% from a year ago. Along with recent reports on business spending, it all points to a pretty languid economy, and certainly not the “second-half recovery” that had been bandied about back in the spring.

(An earlier version of this post referred to the Census Bureau’s September report on retail sales as the report on consumer spending.)