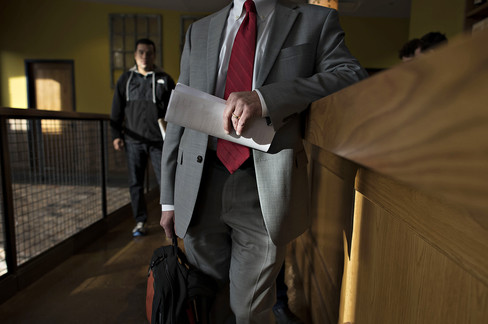 Nov. 7 (Bloomberg) — It’s jobs day, and we’re not the only ones who think the number might be big. Of course, what we know about economics could fit in a thimble. We’re not even sure sometimes when someone’s referring to Fisher or Fischer.

So far this week, initial jobless claims came in less than forecast, the ADP employment figure was bigger than estimated, and Bloomberg’s Consumer Comfort Index rose almost to a five-year high. Yet there are so many ways to slice up economic numbers that to us it often appears to be a push. Labor costs remained muted as productivity improved. If you’re looking for some inflation, notably wage inflation, you’re not finding much.

It must be difficult to find a good reading on wages. The gang out at SouthBay Research, and by gang we mean Andrew Zatlin, discovered some signs of wage inflation a couple weeks ago in the earnings report from Brinker International, the owner of restaurant chains Maggiano’s and Chili’s. In a research note yesterday, he wrote that employment growth this year has been concentrated mostly in minimum-wage jobs, where wage inflation is still spotty. One element we might deduce from Tuesday’s election results is that the minimum wage is a growing issue because it’s not growing enough, notably for those earners.

So you’ve got all these mixed signals out there, and what we could really use is a street-level view of the current wage environment. Zatlin does that, uh, literally, with his vice index. It includes prostitution, drugs, gambling and alcohol.

“In a sign of lower income and middle income consumer stress, some prostitutes are dropping prices,” he wrote. “It is selective and limited in scope: mainly low-tier and mid-tier escorts. High-end escort prices are holding up.”

He was a little fuzzy, when he called us from — where else? — Las Vegas, about how he collects the data, but evidently it’s the Internet at work. (If there’s a Mrs. Zatlin, we hope she’s not nosing around his browsing history.)

Zatlin’s expecting a boffo number — 249,000 total, 244,000 on private payrolls, yet cautions that today could be one of those jobs days when the number comes in completely, completely unexpected. Like, way lower.

“I’m scared,” he says. “You’ve got all this data. ‘Oh, jobless claims are low.’ All the forecasters are all in a tight range and this is exactly when they (the Bureau of Labor Statistics) broadside you” with a report showing 80,000 jobs, he says.

For the record, the median estimate had been 225,000 for a long time and has recently just crept up to 235,000. (Turns out the forecasts were just about on target. Nonfarm payrolls increased by less than forecast 214,00 while October payrolls were revised upward.)

As for the wage inflation, it’s still a way off.

“Tomorrow the market wants to see wage inflation,” Zatlin says. “Any whiff of it is going to be distorted and overdone. If we do see it, so what? Does that mean the Fed’s going to move sooner? Right now, if we’ve got overall low inflation on the horizon — that’s what we have, low inflation — how can the Fed raise interest rates? It’s wishful thinking.”

Today’s U.S. earnings before market open include Humana and Zayo, its first report since going public. Berkshire Hathaway is expected to report after the bell.

Twenty-five years ago this weekend, our better angels could ponder whether an epoch of world harmony had begun.

If you’re of a certain age, as we are, you remember the bewilderment and joy of watching televised images of East Germans and West Germans mingling on both sides of the Berlin Wall, which had long meant so much and which suddenly was irrelevant. It was Nov. 9, 1989, and Europe’s Iron Curtain had fallen. What would come next?

The “euro-euphoria” didn’t last long, James G. Neuger writes in reviewing the ensuing quarter-century, which could hardly be called harmonious.

Any remnant of Europe’s post-Cold War euphoria surely was erased by its debt crisis, or by Vladimir Putin’s assault on Ukraine’s sovereign borders.

Neuger quotes a former head of the European Defence Agency as saying that the “international liberal order,” which seemed to be ascendant in 1989, these days isn’t “riding the wheel of history any more than communism was.”

Helping to confound the situation is the news that Mikhail Gorbachev, a hero to the West since the Soviet Union’s collapse, plans to defend Putin at Berlin Wall ceremonies this weekend.

Like family reunions, anniversaries of milestone events can have a great deal of unease just beneath the happiness.

Remember when the four-letter I-word that represented our gravest external threat was Iran?

That seems like a bygone era, before ISIS/ISIL inserted itself into our bad dreams. Still, Iran and its nuclear program haven’t gone away, and the timeout that let us move on to other worries is about to expire.

As Indira A.R. Lakshmanan and Kambiz Foroohar report today, with just 17 days until a Nov. 24 deadline, “there’s still no agreement on fundamental questions including the scope of Iran’s enrichment program, the plan for lifting sanctions, and the duration of a deal to keep Iran’s nuclear program under outside inspections and safeguards.”

We learned yesterday that President Obama — who, to put it mildly, could use a triumph right about now — wrote to Ayatollah Ali Khamenei seeking an agreement that would allow a joint fight against Islamic State militants in Iraq and Syria. The Wall Street Journal said it was at least the fourth letter Obama has sent as president to Khamenei, who doesn’t seem to have been briefed on the responsibilities of a pen pal.

It’s hard to imagine the two sides bridging their chasm in less than three weeks. Iran continues to insist its nuclear program is for energy and medical research only; the U.S. and its allies remain, shall we say, unconvinced.

As for the prospect of a united front against Islamic State — the carrot dangled by Obama in his Dear Ayatollah letter — the Journal points out that Khamenei, in a speech last month, said the U.S. and its allies “created” al Qaeda and Islamic State so that it could “fight against the Islamic Republic.”

There’s a line in “The Big Chill” that, for us, is the moment (still) when the lump rises in the throat and the room starts to get dusty. It’s during the funeral, when the minister is eulogizing the college roommate whose suicide brings the gang back together for the weekend that becomes the movie’s scenario.

“Where did Alex’s hope go?” the minister wonders.

We saw the movie in its first run, because that’s how you watched movies back in 1983 — in a theater. It was a period in our nascent adulthood when hope was similarly in short supply, and that’s why the floodgates opened. We saw ourselves in that pine box if things didn’t change soon — or, more appropriately, if we didn’t change them.

There’s no accounting for the hands we’re dealt, for what the Fates have in mind, and they really don’t matter anyway. We’ve known scions of Philadelphia who let it all slip through their fingers on the way to early graves, and we’ve known ragamuffins from the wrong side of the tracks who would make Horatio Alger blush.

Yours truly lucked into remarkable fortune after a time many years ago when the breaks were going the other way, when sometimes a dollar a day was shared with a couple old dogs who also needed to be fed. A lot of that difficulty was self-made.

So we can identify with Kristoph Pydynkowski, whose story is so beautifully rendered today by Tom Moroney in his “A Day’s Work” feature. Can you?

What were people expecting? Is “Return of the Jedi” or “A New Hope” really more sophisticated? Someone spent night after night brainstorming in a stuffy Lucasfilms studio basement, enduring hours of staring at Chewbacca and Jabba the Hutt to come up with a name, and this is how Star Wars fans repay them?

“The Force Awakens” isn’t the only victim of online hate. It’s the sad fate of a highly anticipated movie. When Warner Bros. named Ben Affleck as the next Batman, a Change.org petition quickly surfaced. According to the petition, Affleck was “not intimidating enough for the role of Batman.” The petition has almost 100,000 signatures. Because this is the kind of reform Change.org had in mind at its inception.

A passionate online reaction scared off Charlie Hunnam from playing the lead in “Fifty Shades of Grey.” “He’s no Ryan Gosling,” the Internet decreed. Tolkien readers were equally dismayed when director Peter Jackson broke “The Hobbit” into three movies.

No matter what filmmakers decide, the Internet isn’t going to pleased. Because so many people have the ability to voice their opinion, the online community erupts with cynicism. What happened to the good old days when we waited until a movie’s release to bash it?

In “Interstellar,” evidently (from the trailers; we watched three of them) Earth is dying somehow. It ran out of food, or something, even though all three trailers show Matthew McConaughey plowing down fields of corn in his pickup. But there are a lot of dust storms, so maybe the corn’s too dusty to eat.

There’s some eco-politics that ooze out from what we saw — McConaughey, a former astronaut now kicking around in a ratty old barn jacket — gets summoned to his daughter’s school because the kid brought an old textbook of his to class. It purports to suggest men actually landed on the moon, instead of the school’s current curriculum teaching that it was all a hoax to bankrupt Russia. It’s important, the teacher says, because they need to teach kids to save the planet.

Not according to Michael Caine, who plays McConaughey’s old professor or NASA launch director or something: “We’re not meant to save the world, we’re meant to leave it.”

So McConaughey has to navigate these competing dogmas and then navigate a spaceship with Anne Hathaway to find the habitable planet someone thinks they found. Really, you’re fleeing the planet and take Anne Hathaway WITH YOU? (Kidding. Opening Line is pro-Anne Hathaway.)

Anyway, is this starting to get stupid or what? Not stupid enough yet? Here, have another line from the movie: “You might have to decide between seeing your children again and the future of the human race.”

No? OK, this one: “Love is the one thing that transcends time and space.”

To contact the reporters on this story: C. Thompson in Wilmington atcthompson1@bloomberg.net; Laurence Arnold in Washington at larnold4@bloomberg.net

To contact the editor responsible for this story: Marty Schenker atmschenker@bloomberg.net